This is my first blog post on my very *own* filmmaker website! If you’re a frequent reader of blogs (and admittedly, I am not. Sorry wordpress!), I suppose the first blog post is either exceptionally exciting or quite the opposite: a metaphorical speed bump that you force yourself to go over. Go slow and once you get the hang of it, maybe you can put the car into second gear. Speaking of cars, in taking the plunge and moving out to SoCal, I purchased my first automatic vehicle. For two decades, all of my cars have been stick shifts. The perk of driving a stick shift, aside from the obvious economic standpoint, was mainly a cosmetic one. People are generally impressed when you reveal you can drive a stick shift. Especially being a girl!

But, I decided if I was going to endure Los Angeles traffic, I needed to have an automatic. Furthermore, I had been told, there were detrimental health concerns when one is stopping and starting in a manual car. Thus, I introduce to you my first automatic car, which is a pretty sweet ride, if I do say so myself. (Thanks Sally & Sean!)

But I digress. Today was Sunday Funday: technical rehearsal at the Charles M. Schultz Theater (known from now on as “CMST”). We managed to do two run-throughs of the show, sans costumes, but with almost all the set pieces and props as prescribed. While there were a few precarious, near-collisions with aspects of the set, it was overall a good day and one that really prepped us for the upcoming dress runs. Released in time to watch the Tony’s (entertainers must support fellow entertainers), I unfortunately missed the opening number because of my commute. That’s essentially the only reason I tune in to the Tony’s. I am not a frequent Broadway musical-goer, so a lot of the categories/stars are quite lost on me. I watched a few Tony’s get awarded and was excited to see so many female recipients. I then tuned in to “Food Network Star” and salivated over the contestants’ gourmet burger competition. I did happen to catch Neil Patrick Harris’ closing rap/act, which was pretty fantastic. Finally, I settled in to finish my very own website. And now, I have completed my speed bump of a first blog post. Ta-da! 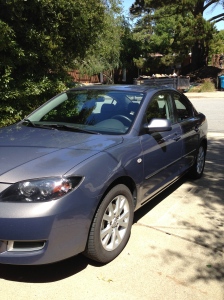 Haven’t thought of a catchy name for “her” yet, but she’s awesome.